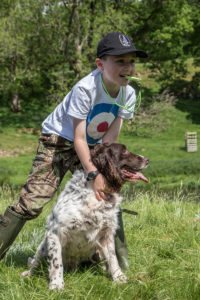 The annual GWCT Levens Team Challenge was held this year on Sunday 28 May at Levens Park kindly hosted by Richard and Naomi Bagot and raised just over £7,000 for the Game & Wildlife Conservation Trust

Thirteen teams of all ages competed in a wide variety of sporting events from clay shooting, archery, gun dog scurries to fly fishing, quad-bike and trailer driving, digger manoeuvring and stone skimming on a beautiful spring day in the stunning setting of Levens Park at the gateway to the Lake District National Park, Cumbria.  The four highest scores in the .410 bolting bunny event competed in a tie break which was a timed retrieve of a dummy from the far bank of the River Kent.  The winner was a dog trained by Josie Smith and run by her team mate Mark Swindlehurst.  There were also prizes for the best team, most original team name, highest scoring lady competitor and most outrageous picnic!

In his summing up Nick Mason, chairman of the Lancashire branch of GWCT outlined the important scientific research of the trust and, in particular, the current conservation project to save the curlew, an iconic bird of Northern England.  Anyone interested in conservation should join the GWCT not just those who have been introduced to the Charity’s work through involvement in field sports, and on the day 5 new members were signed up.  Nick also thanked our hosts the Bagot family and our main sponsors Rathbone Investment Management who have recently moved their North Western office to The Stables, Levens Hall, Kendal LA8 0PD Tel: 01539 561457

The day was sponsored by Rathbone Investment Management with Davis & Bowring ,
Ashcroft Plant Ltd , ERIK Aaron Shooting, Erik Verbeeck and Hewetson & Johnson and supported by artist Alistair Makinson with his kind donation of a sporting painting.